Check out the all new radio show "LISTEN UP" w/ Rev. KP out of North Carolina! Tuesdays @ 7:30p

The Shunice Show airs from Chicago, IL from 12noon to 12:30pm (Est). The show is a talk show interviewing various gospel artists. 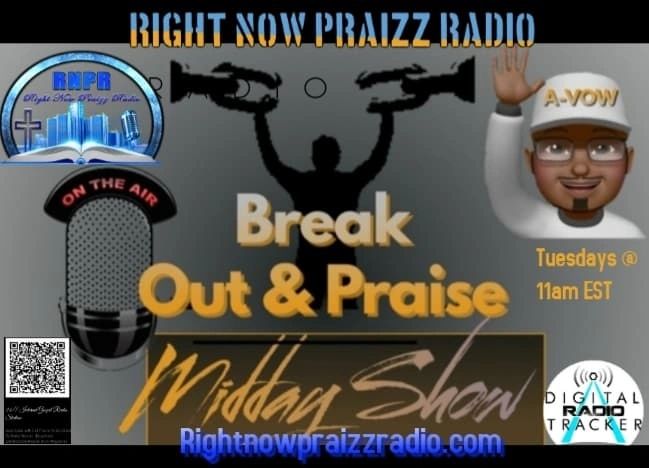 Tune in to the Break Out & Praise Mid-day Show in Atlanta, GA with "Avow" which airs every Tuesday from 11am to 1pm (Est)

TUNE IN ON SATURDAYS

Must Be Heard Radio Show

Give God The Glory Radio Broadcast is a Christian radio program with music, talk, special guests & more on the Right Now Praizz Radio platform.  Pastor Gerald & Lady Carol started the radio show in 1998 with a passion to reach a diverse audience in the Metro Detroit area.  At that time, Give God the Glory Broadcast was on a terrestrial radio station called WMKM Radio which was first located on East Jefferson in Detroit, MI in the old WGPR radio building.  The radio show focused on the teaching of scriptures in the Word of God; and presented a host of guest ministers, pastors and evangelists.  WMKM radio station later moved on E. Grand Blvd and changed its name to WDRJ around 2005 -2006 with new station manager Caleb Foster.  Give God the Glory Broadcast continued until 2009 when Pastor Gerald and Lady Carol decided to focus more on their music and church ministry.

Give God the Glory Broadcast has been back on the grind since October 2016 on Internet radio when a good friend, Sean Hardin, encouraged them back into radio.  Sean introduced Pastor G & Lady C to Core Praise on the Worldwide Core Radio platform in Southfield, MI under Nenee Wilson where the radio show  aired once a week, every Tuesday evening from 7p to 8p, focusing on independent gospel artists and a host of guest interviews from business owners, authors, etc.  Core Praise came under new ownership with Dr. E. LaQuint Weaver in 2017 and the new owner changed the station name to We Praize Radio on the SAM Broadcaster radio platform.

Give God the Glory Broadcast is now syndicated on VSC Radio with Stephanie McDonald out of Virginia.  Right Now Praizz Radio is gaining attention and is recognized by a variety of listeners and gospel artists alike as being truly connected in the indie artist community for gospel, inspirational, talk, and spoken word genres.  Give God the Glory Broadcast won two indie gospel awards in 2019 from Gospel Choice Music Awards (Atlanta, GA); also S & M Gospel Awards (North Carolina).